FINALLY, we made it to Pascha! I can’t tell you how much I’ve missed eating meat. I don’t think the vegetarian or vegan lifestyle is in the cards for me, folks 🙂

Our celebration began at 11:30pm, Saturday night. That’s right– half an hour before midnight! The beginning of the service is always my favorite, because the church is so dark and solemn. The funeral hymns over the “tomb” are absolutely gorgeous.

This icon was just completed a month ago

Then, we all light our candles and walk three times around the church, singing this song: 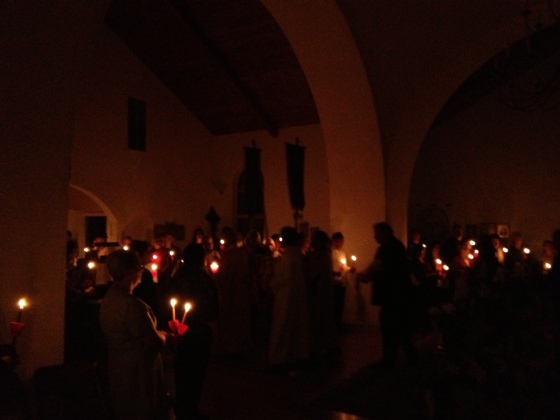 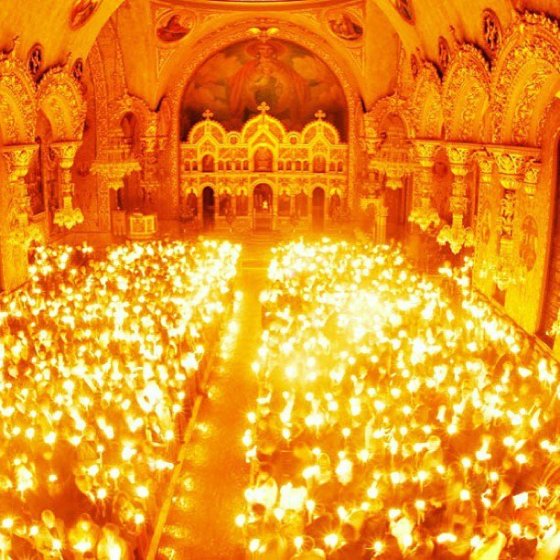 This is what Saint Sophia Church in LA (where Tom Hanks goes) looks like at this stage in the service…UH-MAYZING!

When we come back in, it’s bright, the tomb is gone, and everyone sings at the top of their lungs for the next two hours! That’s right– we don’t get DONE with the service until around 2am!

Our church here in CA does things a little bit differently than our churches in TX and SoCal. Instead of having the big Paschal Feast in the wee hours of the morning, they plan the feast and party for after Agape Vespers the following afternoon.

This worked out well for us, since our 2 year old and 1 year old wouldn’t have done well with staying up past 3am…I’m pretty sure I would’ve spent the entire Pascha outside in the car with a howling kid/s. Instead, Jesse and I got to enjoy it by ourselves, actually getting to focus on everything going on.

We woke up around 10am this Sunday morning, ate a small breakfast (don’t want to ruin the feast!), then gave Gregory his Pascha basket.

His basket was full of chocolate and Thomas trains! The shirt was a complete coincidence, but it works!

Then, we packed into the car around noon. The boys slept the entire way there, so at least they got a small afternoon nap.

Agape Vespers is an absolutely beautiful service, and it’s only 40 minutes long, so it’s perfect for visitors. We had around 30 new  faces there!

Right after the service, there was an Easter Egg hunt for the kids. Gregory was slower than the rest of the kids, but they started taking eggs out of their own baskets and hiding them super close to Gregory so that he could find them. I was really touched by that 🙂

After the hunt, it was time to feast!!! SOO MUCH FOOD. I cannot stress this enough. We ate until we were beyond stuffed, then went back for more. There was beer and wine for everyone, along with coffee and smoothie punch.

And there was a separate dessert table. ‘Nuff said.

We almost felt bad for not bringing anything….until we saw how much food there already was! I think that even with all the visitors, we only got through 60% of it all!

AJ is a fan of stuffing large amounts of food into his mouth (he sorta skipped the babyfood stage). He doesn’t choke– too often!

Gregory was so stuffed, he had to sleep it off!

It was a wonderful Pascha! Best holiday of the year!