I wanted to re-post this because when I tried to do it last year the Youtube video got copyrighted. This skit speaks to my soul. Just be careful not to fall off your chair laughing.

Alright. I am not yet finished with all my kitchen decorations, but I really wanted to show you the project I worked on last night- my kitchen cupboards. I found these at Etsy.com and I divided them up to fit the cupboards.

By the way, now that I love stainless steel sinks and wood floors, I don’t think I can ever go back!:) 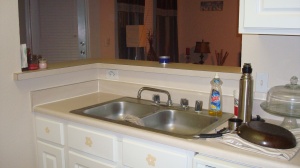 Here are a few more pictures of our house: 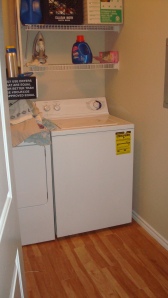 MY closet. Literally. All of Jesse’s clothes are in the guest bedroom closet:) 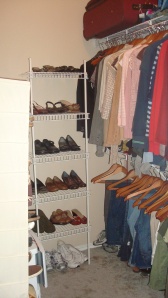 Most schools in Texas are currently using this week as an “Anti-Drug” platform in the public/private schools. Apparently some of them were listening so well, the message even found its way to their hearts in the form of musical inspiration. Here’s a song one of my first graders wrote and played for me during our lesson:

I had a haircut on Tuesday, but since it was late in the evening, my hairdresser styled it for nothing. SO I asked Jesse to take a few pictures of it. The only downside is I won’t be able to do some fancy up-do like the rest of the bridesmaids for Tim and Hope’s wedding.

Granted, Mirabelle is crazy. But she also does precious and adorable things daily, including hiding in anything she possibly can. 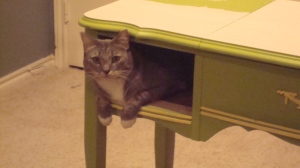 Okay. Because of all the requests, I am going to post just a few apartment pictures. Mind you, the house is not at ALL the way I eventually want it, there are unfinished projects left and right, but because I have been put on a “No Spending Any $ For the House” fast by Jesse, I will not be finished with a lot of them for a week or two.

This little vanity/console table will get a fresh coat of paint soon. I’m not completely color blind-never fear!

Our built-in bookcases near the door entrance. Neither of them are finished with the decor I want. 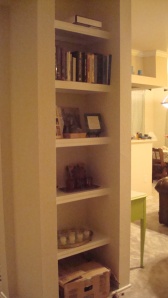 Our dining room, with the table and chairs I got on Ebay for only $15!!! The table isn’t that small, the room is just big.

The Purgatory Desk in our spare bedroom. You can’t see the piano or our wall of Ikea bookshelves, but they are there as well:) 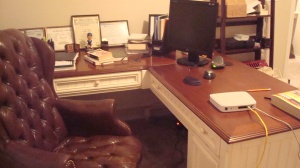 Our master bathroom. I love the high ceilings- I was able to put up 95″ curtains for a more dramatic fancy look. Also the closet. I didn’t dare go any further inside- I haven’t done laundry in a while! 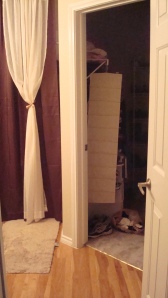 My desk. It is very messy since I haven’t bought organizational boxes and stuff. I would like to point out that Tess is in 3 of the pictures on my desk, Steph in 2, Jesse in none 🙂

Our views from our porch, mostly of the trees and walking trails that go through the complex. We can also see the clubhouse/pool/fitness center. 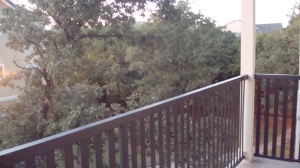 Our front door and garage:

And, last but not least, our icon corner: 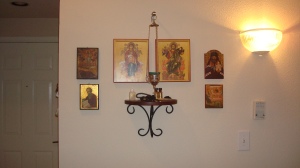 That’s it for now! There aren’t any pics yet of our Master Bedroom, Kitchen or Laundry Room, but I think this will do until my “Fast” is over.

There is this one bathroom at St. Peter’s where the light does not fully turn on until you’ve been in there for a while.

The timing is such that it so happens to turn on almost EXACTLY as you’ve finished doing your “business”. You’re sitting there, and just as you finish, the lights all turn on in triumph, as if to say, “Ta-DA!”

Yay for Hurrah! Toilets. We should totally start a line of these for potty-training and old people.

Last Thursday, I bought a beautiful desk for Jesse off of Craigslist. By beautiful, I mean GORGEOUS- made by Pottery Barn with the high quality that is only typical of handmade-real-wood things.

I had called Michael the day before wondering if he would help me carry it up the stairs Thursday night so that by the time Jesse got home from class, it would be all set up as a surprise.

What I didn’t realize is that high-quality also means EXTREMELY HEAVY. And we live on the 3rd floor. It would have been a great commercial for Pottery Barn:

Kelly: “Well, as you can see here, we’ve got a <OOO> beautiful desk made of <watch out!> real oak wood <alright Michael, let’s set it down for a break>.”

Kelly: “But I’ve just necessitated the need for a chiropractor.”

At one point going up the stairs, we got extremely off-balanced and almost fell. So, being the helpful girl that she is, Courtney reached her hand out to stabilize the desk. It was as if the wood were made of glue- her hand never left and she continued to help us lift the desk off the stairs.

I resisted and said, “Sarah (Courtney’s awesome mid-wife) would KILL me right now if she saw this!”

But my lifting efforts must have been just so pathetic that Courtney could not risk me letting go, thereby crushing Michael under the weight of the desk.

Announcer: “As you can see, our desks are made with the finest quality wood available! Why, they can even crush a man! Take a look!”

We finally made it up the stairs into the apartment and I thought to myself, “That wasn’t so bad!”

Until the next day when I was on my way home and received a call from Jesse, telling me that Courtney was on bed-rest for the next week due to the strong and rapid contractions she was experiencing every time she stood up.

And suddenly, I wanted to kick and throw things. Which wouldn’t have been good, seeing as I was riding home in the car with my boss and his daughter, who already think that I am a big crybaby.

Add onto this that Courtney’s baby shower with her relatives was supposed to take place in Temple the following morning, and I felt like the worst godmother in the entire world. Luckily, Courtney’s family is awesome and immediately understood the irony that would have taken place had we endangered the baby to have a baby shower 2 hrs. away. Instead, they kindly drove up to Courtney’s apartment so that the shower could still take place. Courtney’s contractions have also stopped, which is a good thing.

Lately, since Jesse and I have been reading Dante with our students, we have been inventing different levels of Purgatory for me to go to whenever I have done a bad thing. I am inventing another one right now, wherein I am stuck inside a womb and being crushed by desks every few minutes.

This weekend, a woman from our church named Jeanie Pothoff and I threw Courtney and our friend Katie a joint-baby shower. It was held at Matushka Kathy’s (Fr. Joe’s wife) adorable condo in downtown Dallas, and was attended by around 20 of St. Seraphim’s women-folk. There was a TON of food- it seemed that everyone had some sort of delicious dish to make, including pumpkin scones, mozzera/basil/tomato baguettes, cheese and fruit platters, spinach dip, cucumber sandwiches, and bakery cupcakes in a cupcake tree.

My favorite game, I think, was the one where we all got to go into separate rooms as teams and “make a baby”. Haha, out of PLAY-DOUGH! The mommies-to-be got to be judges. It was rather hilarious, especially when Karen tried to make a diaper for theirs out of a napkin and toothpick. Out of frustration she ended up violently shoving the toothpick right through the baby’s crotch, making everyone gasp! We also played the “You Know Your Baby’s Orthodox When….” game, which resulted in a lot of unbelievable stories from the mothers about inappropriate or awkward things their kids have imitated or done as a result of being Orthodox. My favorite was about one kid who took a cross to his non-Orthodox grandmother and said, “Bow to the cross! BOW!” Another kid grabbed a For-Sale sign out of a yard one time and tried to hold a “Procession” on the grass.

If you want to see some pictures, you can go to this folder on Courtney’s facebook profile.

I mentioned to my boss this morning that I was unusually tired and couldn’t wait for the weekend. Upon agreeing, he gave me this poem several minutes later. He said it was supposed to cheer me up.

O proud left foot, that ventures quick within
Then soon upon a backward journey lithe.
Anon, once more the gesture, then begin:
Command sinistral pedestal to writhe.
Commence thou then the fervid Hokey-Poke,
A mad gyration, hips in wanton swirl.
To spin! A wilde release from Heavens yoke.
Blessed dervish! Surely canst go, girl.
The Hoke, the poke — banish now thy doubt
Verily, I say, ’tis what it’s all about.
— by “William Shakespeare”